Behaviorally Modern Humans: The Origin of Us 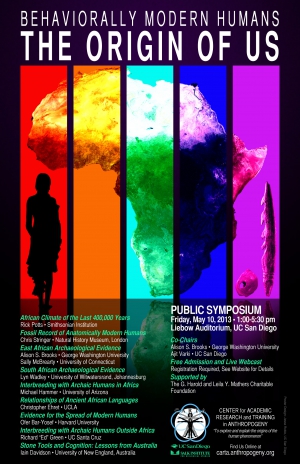 Current evidence indicates that multiple upright-walking, tool-dependent species in the genus Homo co-existed in the Old World (Africa, Asia and Europe) for most of the last 2 million years. Yet only one surviving species of Homo exists today. Even 100,000 years ago, at least four Homo species shared the Old World. One of the enduring questions of human origins is when, where and how we "Behaviorally Modern Humans" emerged and why and how we eventually replaced all the other human-like species. In the past, competing theories have generated much controversy and even some acrimonious debate. This symposium set aside such theories and debates and took a fresh look at the situation today. The focus was on critical examination of the available evidence from multiple sources, including climate proxies, geology, fossils, archaeology, linguistics, immunology, genetics and genomics, as well as evolutionary neuroscience/cognitive archaeology. While the symposium may not have come to any definitive conclusions, it offered the best interpretation of current evidence, and suggested research agendas for the future. [DOWNLOAD ABSTRACTS AND BIO FILES BELOW]