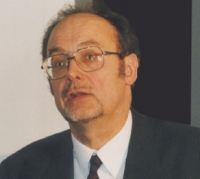 Tim Crow is currently Honorary Director of the SANE Prince of Wales International Centre for Research on Schizophrenia and Depression and member of the UK Medical Research Council External Scientific Staff. He is engaged in studies on 1) brain structure at a macro- and microscopic level in psychosis in post-mortem brain, 2) brain structure and function in MR imaging investigations in relation to language, and 3) studies of the sapiens-specific gene pair ProtocadherinX and ProtocadherinY as putative determinants of the cerebral “torque” in man. His interest in speciation arises from the conviction that psychosis is “the price that Homo sapiens pays for language” and that it represents a sex-dependent component of variation that is inseparable from the species. He is author of two ISI citation classics – Catecholamine-containing neurones and electrical self-stimulation – 1. a review of some data. Psychol Med 1972; 2: 414-421 and Molecular pathology of schizophrenia: more than one disease process. Brit Med J 1980; 280: 66-68 – and co-author of the first CT scan study of schizophrenia (demonstrating ventricular enlargement, Lancet 1976;ii: 924-926) and the first report of a mutation associated with neuropsychiatric illness (familial prion dementia, Lancet 1989; i: 51-52). He edited The Speciation of Modern Homo Sapiens (Oxford University Press, 2002) a volume that arose from the first meeting on this topic, organised under the auspices of The British Academy and The UK Academy of Medical Sciences. He was Head of the Division of Psychiatry of the MRC Clinical Research Centre at Northwick Park Hospital from 1974 to 1994.