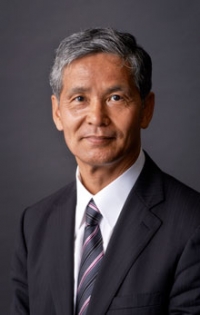 Tetsuro Matsuzawa is a former Director of the Primate Research Institute of Kyoto University, Japan.  He is currently the Academic advisor of Chubu Gakuin University and a Visitor in Psychology, California Institute of Technology, the USA.   Matsuzawa studies chimpanzee intelligence both in the laboratory and in the wild. His laboratory work, known as "Ai project," focuses on the language-like skills and the concept of number: The participants are a 45-year-old female chimpanzee named Ai, and her 22 year-old son named Ayumu, and others live in the KUPRI community of 12 chimpanzees including 3 generations. The Ai-project started in 1977 and is one of the longest laboratory research studies on the chimpanzee cognition and behavior. The working memory of young chimpanzees can be better than humans (https://www.youtube.com/watch?v=ktkjUjcZid0).  The fact led him to the "Cognitive Tradeoff Hypothesis".  In his parallel effort, Matsuzawa has also studied wild chimpanzees at Bossou and Nimba, Guinea, West Africa, since 1986. The Bossou chimpanzees are well known to use a pair of stones as hammer and anvil to crack open oil-palm nuts. His long-term research revealed interesting topics like the perfect lateralization of handedness of using a stone hammer, the critical period of learning nut-cracking at the age 3 to 5, and the social learning called "education by master-apprenticeship," etc. Matsuzawa tries to synthesize the field work and the laboratory work to understand the mind of chimpanzees, our evolutionary neighbors. He has received several prizes including the Purple Ribbon Medal of Honor, the Jane Goodall Award, Person of Cultural Merit, Japan. He has published many articles and books such as Primate Origins of Human Cognition and Behavior (Springer, 2001), Cognitive Development in Chimpanzees (Springer 2006), The Mind of the Chimpanzee (Chicago University Press, 2010), and Chimpanzees of Bossou and Nimba (Springer, 2011).