Exploring the Origins of Today's Humans 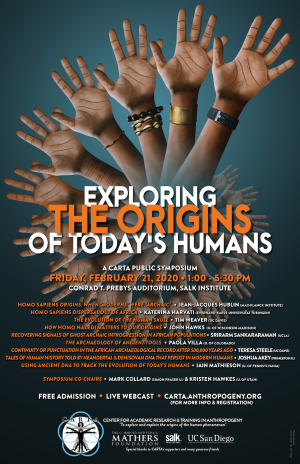 Summary:
Where did we humans come from? When did we become the dominant species on the planet? Available evidence indicates that all humans living today are derived from a relatively small population that arose in Africa beginning >200,000 years ago, spreading throughout Africa and eventually the rest of the planet. In the course of this diaspora, we mated with other human-like species and assimilated some of their DNA, but eventually replaced all of these other close evolutionary cousins, without exception – leaving only one human species today. A flood of new information from Ancient DNA, Fossils, Archeology and Population Studies calls us to revisit the matter, summarizing knowledge and updating conclusions since the last CARTA symposium on the subject six years ago.